Celebrating its 70th running this year, the Fuji Mountain Race took place on Friday, July 28. As in past years, the first 10.8 km from Fujiyoshida City Hall at 770 m elevation to Umagaeshi at 1450 m was a gentle climb on paved roads. From Umageshi runners enter trails, and for the kilometer from Hanagoya at the 7th Station all the way to the 8th Station it becomes a very difficult 40-degree incline climb. After that runners pass through an area of rough volcanic rocks as they approach Mt. Fuji’s summit. Peaking out with a net elevation difference of 3000 m, the 21 km Summit Course continues to gain a reputation as Japan’s premier mountain race. Last year bad weather forced the race to be stopped at Mt. Fuji’s 5th Station, meaning that this year’s race would be the first time in two years that  runners would finish at the peak.

Men’s winner Gorotani is just 24. As part of Toyo University‘s ekiden team he ran the Hakone Ekiden twice, finishing an outstanding 3rd on the uphill Fifth Stage in 2016 behind stage winner Daichi Kamino (Aoyama Gakuin University). Gorotani now runs for the Comody Iida corporate ekiden team. Last year he won the Fuji Mountain Race 5th Station short course, breaking the course record by a wide margin. Having qualified for the Summit Course, Gorotani returned to live up to expectations with another superlative win. Taking control of the race early, Gorotani opened up a lead of 14 minutes over 2nd-placer Satoshi Kato, yet another runner-up finish for Kato. Gorotani was misdirected by course marshals very early in the race, but officials judged the error to have had no impact on his result. 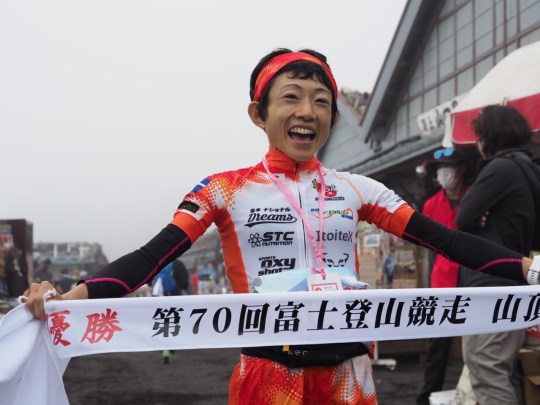