Before I left for the United States, Captain Ferdie Espejo told me that our runners in the Philippine Army would like to run in the TNF 100 and they were looking for sponsors who would support them in terms of registration fees, support and miscellaneous expenses. So, I told him that I am willing to support and finance their entry and participation in the said event with the condition that the runners will carry the name of Bald Runner and they will bring home what ever prizes they would earn or win. I wanted the runners to win and get the cash prizes for their respective families and for themselves. Thus, the BR’s Team was born. (Do you think the AFP or the Philippine Army or the PSC/NSA or any corporate entity will give support for these runners with two weeks to go before the race?)

The BR’s Team entered three (3) runners in the 100K Solo Run—Mamerto Corpuz, Esmeraldo Ondoy, and Ellen Tolentino; and one team for the 100K Relay Run consisting of Cresenciano Sabal and Reynaldo De Los Reyes. Three (3) of our runners registered in the 20K and 10K events.

The BR’s Runners brought home five (5) Belt Medallions; P 5,000 worth of Gift Check and P 50,000 Check to be encashed this Friday. All of these prizes went to the runners. Spending Eleven Thousand Pesos (P 11,000.00) to these elite runners was a worthy investment for their effort, experiences, and the belt medallions/cash prizes they received.

I was happy to receive the news about how the BR’s Team runners’ accomplishments in the TNF 100 from Captain Espejo (who was constantly sending me text messages) and from the other runner-bloggers who joined the race. I was happier with the thought that I was made to be “an instrument” for these deserving elite runners to experience ultra trail running with the prestigious The North Face as the main sponsor.

The following pictures were taken by Captain Espejo which he sent through e-mail to recap his report to me on the said race: 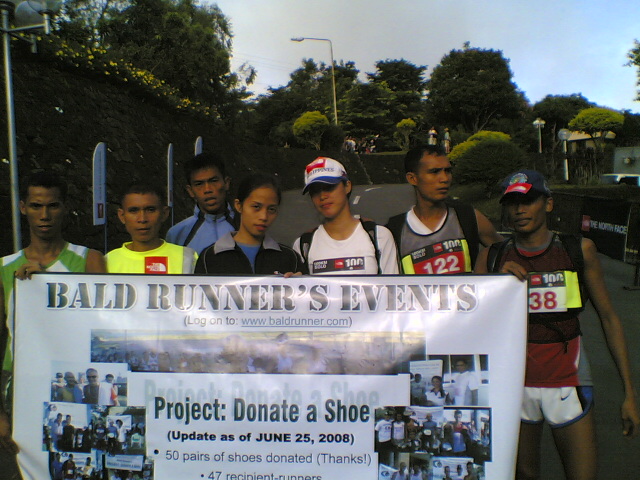